How is everyone doing today?

My day was a pretty unproductive day. I decided I wasn’t going to watch the news today and I’m in a much better mood, no idea if that is related or not.

My boredom got the best of me today, my boyfriend already had money on his Nintendo account and all I needed to do was get the rest and I could buy the new Animal Crossing game so that’s what I did. Once Drax was all tired out and ready for his afternoon nap I started to play the game. I played all afternoon until Drax woke up and it was time for his dinner and after dinner walk. The game is cool, instead of already coming into a city that is made you are on a island and you have to build it all yourself. Definitely stepped up the game and I’m super excited to unlock all the stuff.

After Drax’s walk I came in to make dinner, we decided on spaghetti and homemade meatballs. Dave said they were going to take long but they only took 25 mins to cook and I timed it so everything would be ready at the same time. Needless to say he was happy I made them because he went for seconds and then started to eat just the meatballs on their own.

So in the big pot we have my sunflower that I named Posty. His roots were growing out the bottom of the cup so it was time for him to upgrade to the big pot.
Top row going left to right: arugula, spinach, rosemary, pumpkin, and cilantro.
Bottom row going left to right: garlic, arugula, spinach, Dave’s sunflower named S.F. Malone, and another pumpkin on the end.

So the reason Dave and I named our sunflowers is for three reasons, 1. I’m obsessed with Post Malone, 2. He has that song Sunflower and 3. Dave and I are having a competition on who will have the bigger and better sunflower. As you can see mine is currently winning the race. Don’t get your hopes up though folks, I tend to kill plants so we’ll see how this really goes. 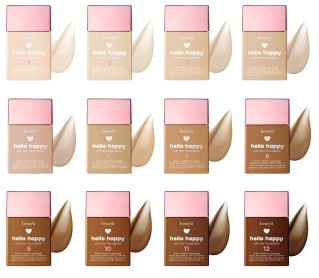 I had a wedding in October and decided to get my makeup done at Sephora in Barrie (because that’s where the wedding was taking place) and absolutely loved my makeup artists and loved the products she used on me. I don’t like having a lot of makeup on my face because 1. I don’t like the feeling of it and 2. I hate hiding my freckles (yay UK background). I told the stylist this and she nailed it. This foundation was the best anyone has used on me to this day. It didn’t feel like I had anything on and I could still see my freckles. You can get this at Sephora for $40.00.

When it comes to Aveda I love anything that’s the ‘Shampure’ smell (it’s the typical Aveda smell if you know what that smells like) so I love this hand creme in the shampure scent. It also comes in a cherry almond scent that I love. You can get this at Aveda stores or salons for $34.00

DRY HAIR! Do I have your attention? This Aveda oil works well out of all oils because it actually goes into the hair strand rather then sitting on top and making you think it’s working. This bottle will last you a while as with every Aveda product, a little goes a long way. You can put this in wet or dry hair before blow drying or after or just to refresh your ends on non-wash days. You can get these at Aveda stores and salons for $41.00

The North Face Women’s Artic Down Parka
I needed a new winter jacket because thanks to my dog who ate my old one. So naturally I fell inlove with the most expenive jacket. (LOL) I got this one at Sports Chek for $399.99 but it was worth every penny.
Home Favourite:

Structube Shari White Dining Table
My boyfriend and I finally got a bigger place that allows us to have an actualy dining table so I found this one and absolutely love it. I actually got a noise complaint putting it together because I was so excited for my new purchase. I’ve fallen in love with this store because they have better quality products then Ikea but you’re not breaking the bank for it (don’t get me wrong they do have expensive things but you can find good ones for cheaper here too.) This cost me $299 at Structube.
Music Favourite:
https://www.youtube.com/watch?v=LYa_ReqRlcs
Take What You Want by Post Malone
Thanks for reading,
Maeg

This has all the wants of a chapstick but more. You can use it as a chapstick or use it as a pre-treatment before putting your lipstick on. You can get this at Aveda store or salons for $34.00.

I was using a different face cream but it was too heavy after using it for awhile it made me break out. I decided to randomly try the body shop since it was cheaper and I wanted to try something new. It’s light weight, doesn’t smell like hemp that much, and it last awhile. This is $14.00 at The Body Shop.

A styling serum that smooths frizz, tames flyaways and adds shine. Its light weight and a little goes a long way. It’s used best after you’ve styled you hair. You can get this at Aveda stores and salons for $42.00.

I wanted to spot wasting plastic bags because I noticed my boyfriend and I have been using them more and more so I ordered these! I asboluely love them and I want to order more. They’re durable, easy to use and super easy to clean. You can get these online at russbe.com or try at Winners. They’re roughtly $8-10 USD online.