Elefun was an elephant that had a long plastic trunk that propelled paper butterflies out of it, it came with nets that you use to catch as money butterflies as you could before they touched the floor. This game was made in 1993 but was remade and released a bunch of different times, they even have a spin off called, “Elefun Busy Ball Popper.” 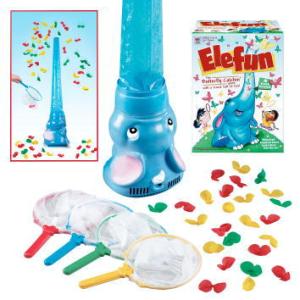 I remember playing Elefun like it was yesterday! I was a pretty short kid so I always had to look up but it was still the best game. I remember my sister didn’t always want to play with me but it was fine since you could play on your own.

The worst part about this game was that the trunk was so long! Getting the game started took awhile for me because you had to hold it up, turn it on and make sure the trunk filled with air so it would stay up. That wasn’t the easiest task when you’re a short kid.

In the end there was no real complaints about this game, I thought it was the best and had great fun with it!

Let me know if you had this game and what you thought of it!