Well Hello, I know I haven’t been around in awhile but I’ve been busying and I’m pretty sure I say that every time I write a new post. LOL. The reasons why I’ve been so busy is that my boyfriend, my sister and I were suppose to go to the aquarium but he got sick so we postponed it. Instead we went to go get another chameleon! He already has one named Allen, which I love and I won’t let him get rid of.

This small green one is Allen. I love this little guy, he gets so angry and annoyed really easy but he is a cutie. He loves to crawl on me and just chill on top of my head; he’s just a little guy.

Now this morning my boyfriend couldn’t sleep so he woke my ass up and drove all the way to Markham to get this new one. We got there and he went in and came out with this little cute orange, red girl!

She’s fat compared to Allen but that’s because she is going to get a lot bigger then him as well. We have a big tank set up at his house which she seems to be getting comfy in! On the way home since it was a long drive I took her out of the container, she just sat on my knuckles the whole way home, she seemed pretty comfy there. When we were maybe 5 mins away from home she decided that she wanted to go for a run. She ran up my arm and down my back and I only got her off because we hit a red light and my boyfriend quickly grabbed her and gave her back to me. She kept doing it because she wanted to be high up so I raised my arm, she stopped but then the next problem was that she wanted to climb on the roof of the car. I made sure she didn’t then when we got her home we put her in his tank to get use to it.

My boyfriend said this one is mine apparently and I had to name her but I didn’t know. So since she has orange and gets really orange when she’s happy we named her Pumpkin. I think it’s cute and goes with my personality and plus my mum called me pumpkin when I was little; which she’s only 4 months old. 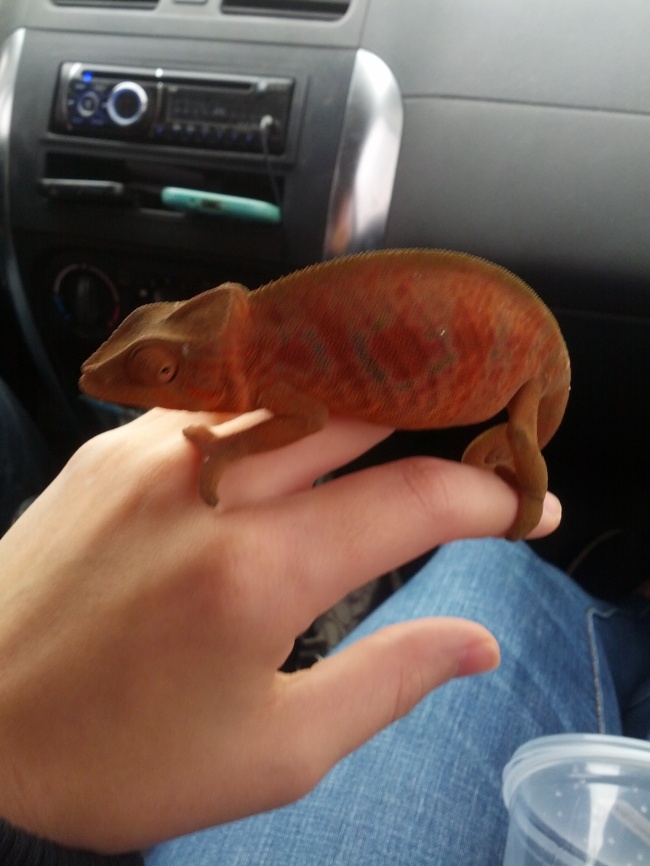 I will keep posting pictures as she gets bigger, I’m hoping she will get like really big but we will see!